You are here: Home / Soulful Guidance / How to Stay Sane During a Mercury Retrograde?

Mercury Retrograde is a time where Earth and Mercury are aligned in a certain way where Mercury appears to be going backwards.

Mercury is situated closest to the sun so therefore its orbit is shorter than Earth’s.  Because of its shorter orbit, a year on Mercury is 88 Earth Days as in comparison to 365 days on Earth. In essence, Mercury experiences four years to Earth’s one full loop around the sun.

Therefore, Mercury speeds past Earth 3-4 times a year, which is when we experience the Mercury Retrograde. During these certain times, the positioning of the two planets creates the illusion from Earth that Mercury is going backwards even though it isn’t.

Mercury governs transportation and communication on all levels.

Of course, this includes listening and speaking but it incorporates learning, reading, editing, and researching. In addition, it governs negotiating, selling, and buying which usually includes working with contracts, deeds, agreements, wills, and leases.

Transportation wise, this planet covers all type of codes, which are used in computers, shipping, invoicing, and all forms of travel. These codes will tend to get mixed up and create confusion, cancellations, or purchase errors.

When a planet moves forward it shares its powerful positive influence with us. With the illusion of going backwards, it stifles its energy by slipping into a resting or sleeping state.

While napping, the activities that the planet governs do not have the full support of its planet’s influence or supervision.

Unfortunately, Mercury Retrograde may cause some havoc in your daily life.  Some examples of things going haywire will be your computer crashing, Wi-Fi in constant search mode, electricity getting cut off, missed flights, car breaking down, appliances needing repairs, higher tensions in the workplace, excessive arguing with your loved ones, emails and documents going missing, and so much more.

It can be scary the inconvenience it can cause. Who wants to deal with that?

Mercury rules anything that begins with “re”. This includes reflect, reorganize, reassess, repair, redesign, or revisit. As duly quoted by astrologers, “As above so too below”, the planet’s backward illusion brings forth energy for us to also go backwards.

Despite the technical difficulties, this time brings a lot of perspective and ability to look at things, situations or people from a different angle.

Mercury retrograde provides us with a bigger and broader picture of what we may have missed or wrongly assumed before. It also gives a boost in helping to resolve old issues, releasing old negative emotions, and finding closure to certain situations.

The Retrograde also brings this time to stop and take a break from always being in a hurry. As humans, we tend to push ourselves to the limits.

We are always searching for the next big opportunity (which we can really capitalize during the New Moon Phase) but during the Mercury Retrograde, we are somewhat forced to slow down. It is a beneficial time to rework a certain idea or focus on perfecting your craft and improving the quality of your performance. This time allows us to redirect our energies more productively. 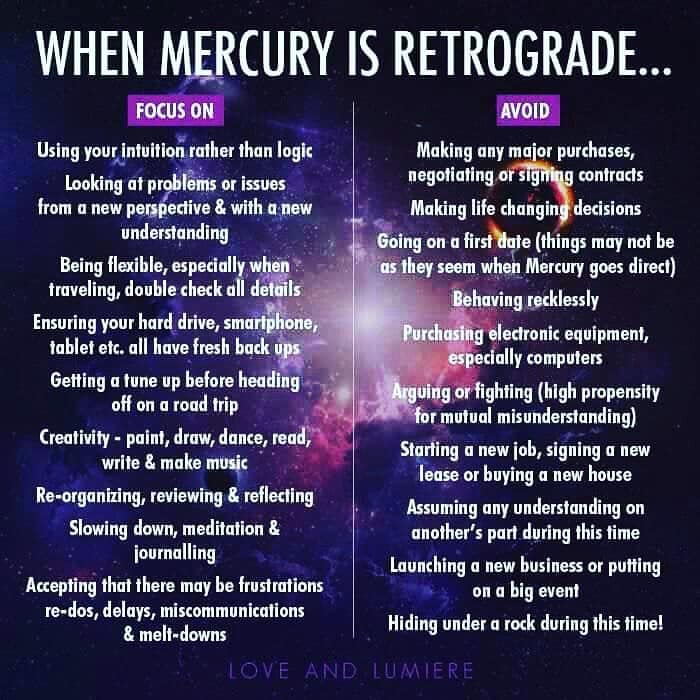 How to Maneuver within the Mercury Retrograde

The Mercury Retrograde doesn’t have to be this “impending doom.” One good thing is we know when it is going to happen.

You have time to prepare and coordinate your schedule. Start or launch your projects beforehand or sign new leases and move after it passes. Plan to reorganize your house and closets during that time.

Perhaps spend more time unplugged from your phone or computer, get off social media and go outdoors. Reflect and heal.

Since you know the areas Mercury governs, try to use common sense and a whole lot of patience. Avoid making any major decisions during the retrograde. It will be difficult to stick to a plan or get final decisions from others. Most likely these decisions will change after the retrograde.

Work wise it is best not to launch a new endeavour, campaign, website, or product during a Mercury retrograde. Hold tightly and wait until communications return back to normal. Avoid signing any contracts or even making verbal agreements. This includes closing on a house or signing a lease.

Also, if you do have a choice, avoid scheduling any surgeries during this time. We are more prone to make mistakes and misjudgments during a retrograde. Your surgeon is just as effected so try to hold off as much as you can.

As dismal as it sounds, the last thing you want to do is be afraid to join the living. Instead, embrace its energy and the good qualities it brings.

Flow with it instead of getting frustrated with it.

Be kind to one another because communication is sensitive at the moment and can be easily misconstrued.

Keep your vibrations high and you will be all right. 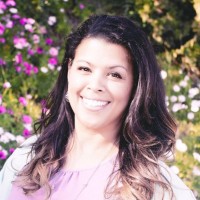 You may be interested in these posts from the same category.

5 Simple Ways for Meditation (For Beginners)
Next Post: How to Attract Abundance in Your Life

Want to Stay Inspired? Sign up for our Soulwhisperer Newsletter. And Receive a FREE Angelic Meditation (MP3)